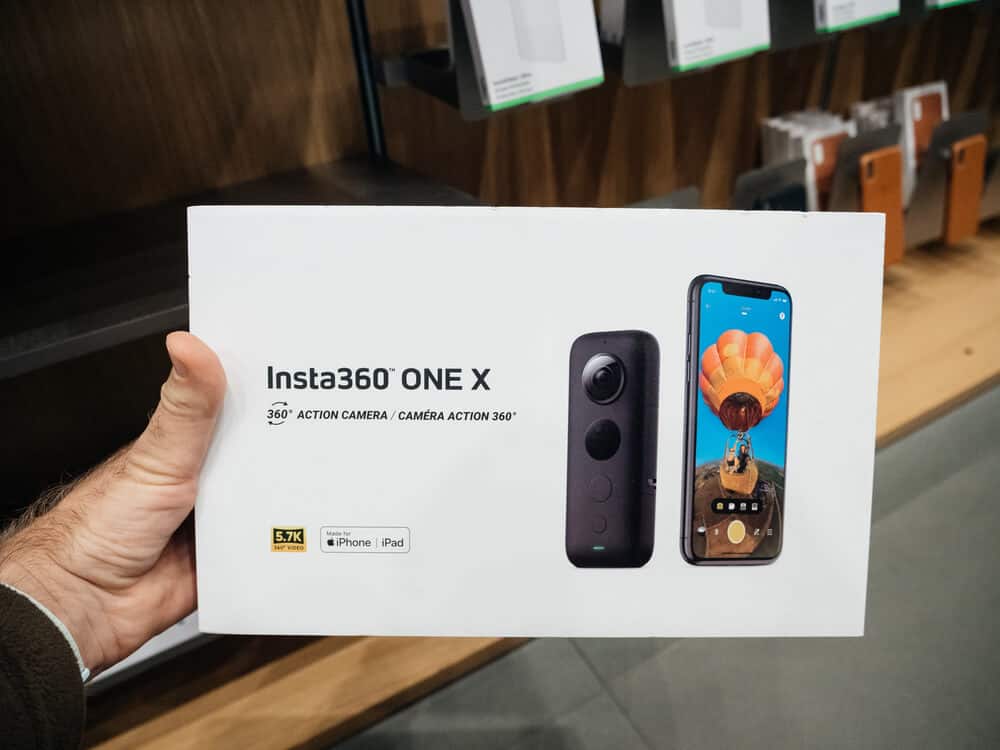 Are you looking for the best 360 cameras available to purchase in Australia? if so you've come to the right place is today we will be looking at 5 of the most top rated models.

Weather range of different features and specifications they suit a wide variety of different budgets whether you are looking for ultra affordable or the Holy Grail.

Below we have added the specifications and the features for each model to help you decide which is the best model for you. These types of 360 cameras make great Christmas, birthday and gifts for family members. Additionally they are good for business purposes such as creating virtual tours. 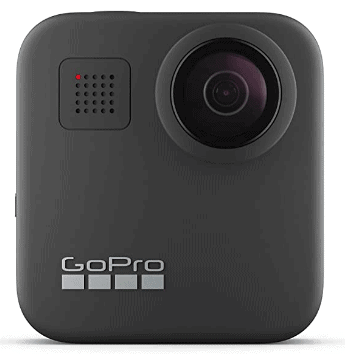 The GoPro MAX is equipped with 3 integrated cameras to film in 6K at 30FPS. There are both single and dual 360 lenses. It allows unrestricted creative freedom, with the option to place any digital lens. There is a touchscreen panel to control settings and GoPro app for more customisations.

Time Warp can also be enabled to slow down or speed up recordings for dramatic effect. With the GoPro Max, panoramic photos can be captured with a click.

There are 6 integrated microphones to capture high-quality audio from all directions. In HERO mode, directional audio can be enabled which is great for vlogging. The battery life is listed at about 1 hour.

The GoProx Max is encased in a waterproof body that works 5m underwater. There is USB-C connection.

This 360 camera from Ricoh Theta allows you to record footage in 4K at 30FPS. It is fitted with 4 microphones which captures sounds in all directions.

With integration of a Qualcomm Snapdragon processor, this product has increased image processing and transfer speeds. The processor also enables higher exposure accuracy.

There are several shooting modes available for activities such as vlogging. There is interval shooting and self-timer, in addition to many more. Besides recording images and videos in 4K, this product can also be used to livestream. The battery life is listed at 80 minutes.

Ricoh Theta has a dedicated app called THETA+ to instantly edit photos and footage. The app also allows you to share your creations on social media through Instagram and other platforms.

The V 360 Spherical Camera has remote playback enabled which works great with devices such as the Amazon Fire TV Stick. It has a micro-USB connection. 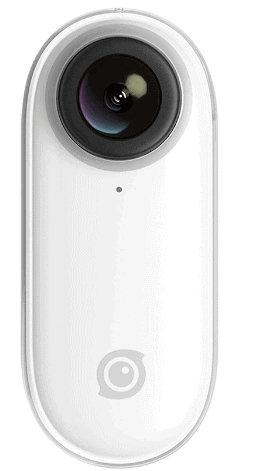 The insta360 GO is currently the smallest stabilised camera on the market. It is designed specifically for hands-free use, and can be attached to clothing. Capture videos in 1080p and create slow motion footage thanks to a 100FPS capacity.

This product employs FlowState stabilisation to keep recordings stable and even. There are automated playback speeds and editing using FlashCut, an AI service to stitch together the best footage.

The insta360 GO can also capture timelapses and hyperlapses from any position. There are several shooting modes to capture wild rollercoaster rides and long sunsets. Barrel Roll can also be enabled to manipulate rotation of shots.

This is a user-friendly camera that has a dedicated app for exporting and editing footage through Insta360 App. There is a micro-USB connection that is compatible for any smartphone, PC and tablet. A battery life of 60 minutes is listed.

The box comes with a magnet pendant and pivot stands for use straight out of the box. 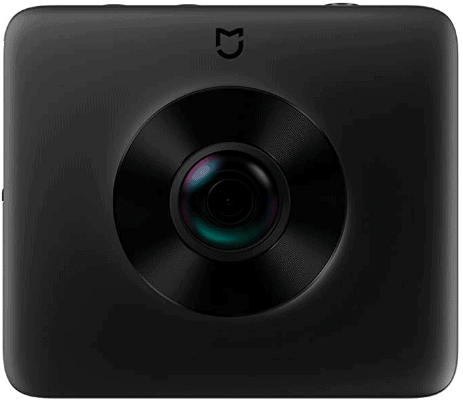 This 360 camera from Xiaomi enables outdoor lovers to record footage in 3.5K at 30FPS or 60FPS at lower resolutions. It includes dual Sony image sensors to capture high-quality images. All in all, 23.88MP images can be taken.

This product is also supported by 6-axis stabilisation which is useful for motion-heavy footage such as skydiving and sports. This prevents bumpy and shaky recordings.

This camera is housed in an IP67 waterproof case which works in both wet and dry weather conditions. There is a 1600mAh battery which allows 75-minute long recording sessions.

The Xiaomi Mi Sphere is a compact product that fits into the palm of the hand. It comes with a USB cable and tripod.

The Insta360 ONE X enables video recordings at 5.7K at 30FPS and 18MP images. There are several shooting modes available, including timelapse, bullet time and HDR video. This camera can also be used to livestream. There is a maximum rate of 50FPS for the highest quality footage.

This product is supported by 6-axis gyroscopic stabilisation for activities such as bike riding and sky diving. Airborne slow-mo can be enabled to capture shots from every single angle.

The Insta360 One X is compatible with all major smartphone devices such as iPhones, Pixels and Samsungs. The Insta360 App can be downloaded and used to instantly share images on platforms such as Instagram and Twitter.

This camera comes with a rechargeable lithium battery which has a standard battery life of 60 minutes. It is only compatible with V30 microSDXC.

This is the perfect product for intense video capturing of outdoor activities.

How to choose the best 360 camera?

when it comes to choosing the best 360 cameras that can capture scenes, action sequences and the environment in such a way that no other camera in the world can it can be difficult to choose the best one for your individual needs.

360 cameras generally offer 80 number of different shooting options which will allow you to create video as well as stills which can be enjoyed as virtual content such as tours in browsers and applications.

They can also be edited into normal videos where you can point the camera and follow the subject for example following someone riding a bicycle or driving a car.

What to look for when buying a 360 camera:

Is a few different things to consider when purchasing a 360 camera including the quality of the camera and the recording as well as the build quality, price, warranty, battery life, waterproof rating and the connectivity.

One of the most commonly asked questions is what type of recording do I actually need and this is where most people get confused as some models are offering HD while others are offering 4K and some or even offering 6K.

Right now most televisions and computer monitors can only support 4K video playback however in the future this is likely to change to 6K or even 8K.

4K quality is a lot higher than HD however you also need to consider it the frame rate on the playback. The higher the quality often the lower the frame rate such as 30fps whereas HD quality May support frame rates of up to 100 FPS.

Learn more about framerates in video.

Most 360 action cameras have a high build quality and due to the small nature of the camera and the Rugged material around the outside the build quality is pretty good.

However it with that said some models are better then others. GoPro for example have been around for many years in this industry and are well known for having a high quality build for their action cameras. Other friends that are fairly new to this industry may have less rugged action cameras.

Most 360 cameras are much more expensive than traditional cameras because of the lenses that are included on the camera. You can however get some ultra budget-friendly 360 cameras however today we have looked at middle of the range models which have a price point of around $300 to $600 here in Australia.

You generally get what you pay for however it will definitely pay to check the latest reviews and ratings on sites such as Amazon to ensure you are buying the best model for the price that you are paying. Some models come with features such as 6K video recording which most consumers will not need and can simply make do with 4k video recording instead.

One of the downsides to purchasing a 360 camera is that the battery life is not that great and you can expect to receive around 60 to 70 minutes on average as a top end battery life.

Some models such as the GoPro 360 Max that we reviewed above have slightly longer battery lives depending on the quality of footage that you are shooting however you can expect to receive between 85 and 105 minutes.

Most action cameras come with a rechargeable battery however if you are out and about it can be difficult to recharge your battery and may take a bit of time. You may like to invest in purchasing an additional camera battery and these are priced quite competitively.

Most action cameras are waterproof but it will pay to check how waterproof they are? can you for example take them underwater or are they simply water resistant and can handle a little bit of spray if you were out and about and it started raining or you were partaking in an adventure activity where the camera may get a little bit wet.

Some camera such as the GoPro model that we mentioned earlier are completely waterproof and can be taken underwater up to depth of 5 mm without getting damaged.

What it can be beneficial to look at the IPX rating and this will determine how waterproof the camera is that you are thinking of buying. Generally the more expensive the camera the higher quality the IPX rating will be.

Most of the 360 action cameras that we have looked at today come with great connectivity and sharing options. this may include a piece of software on the camera which allows you to share directly to social media so you can share your videos and photos instantly while on the go by simply connecting to a Wi-Fi connection or your laptop and posting directly to your wall.

Additionally most cameras come with additional software which can be installed on a laptop or computer which will allow you to connect your camera via a USB cable and quickly charge your device as well as move your content from the inbuilt not to your computer.

I would definitely recommend purchasing a camera which has a built-in feature like this which allows you to share directly to social media as it can be very handy when out and about.

Some cameras offer a connectivity by Wi-Fi so you can directly upload images to your computer or phone from the camera by simply pairing the two devices together.

360 cameras still use flat sensors but they also use back-to-back fisheye lenses which allowed the camera to capture a 180° angle of view and then once you merge these two together you get a 360° view of everything around you.

It's pretty straightforward however it took a while for the technology to be developed however it is now fairly easy to purchase and pick up a 360 action camera which will allow you to do this functionality. Learn how a 360 camera works here.

You've seen the best 360 cameras Australia has to offer, why not checkout these related guides and articles on other cameras: