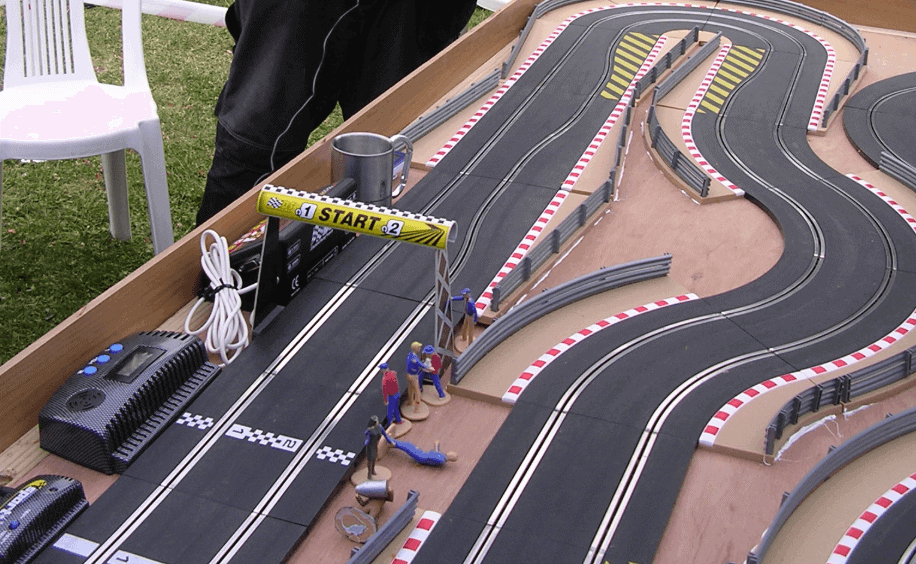 Scalextric has been around for as long as I can remember. I was about 5 years old when my dad bought our first set, and it's great to see it's still around nearly 25 years later.

Today we'll be looking at the best Scalextric sets Australia has to offer, from simple figure 8 tracks, through to extreme speed sets and everything in between.

Featuring special editions such as the Bathhurst Supercar sets, unique to Australia through to famous races such as the Le Mans 24hrs, there's something for everyone, at a range of budgets.

Unfortunately finding a retailer that stocks Scalextric on a reliable ongoing basis in Australia was quite a challenge, but eBay definitely has the best selection from a range of sellers. 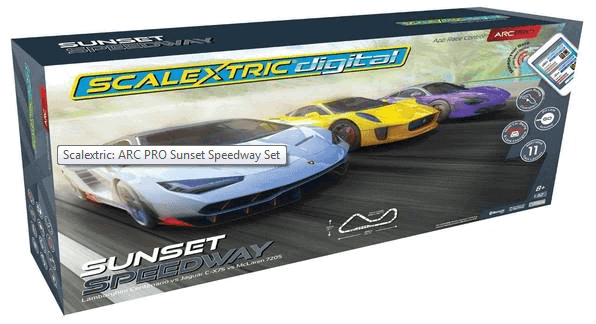 BUY ON AMAZON
BUY ON EBAY

With the use of the Scalextric app on a mobile phone and the ARC PRO digital network, racers can compete against one another wirelessly. The app allows players to put in racing backdrops such as the Grand Prix that curate an immersive experience.

Moreover, special features such as pit stops and fuel usage can also be displayed. Cars featured with this set include an exclusive McLaren 720S, the Jaguar CX75 as well as the Lamborghini Centenario at a 1:32 scale.

These 3 cars can all be raced alongside one another on the 6.8m track which consists of 8 different layout options, making each race unique.

Even though 3 cars are included in this set, up to 6 cars can be played on the track. A key attribute of this track is the lane changing units allowing racers to speed up and overtake. 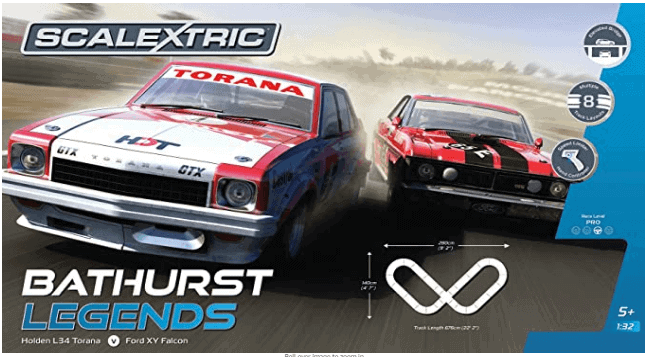 This Scalextric set is meant to replicate the feeling of races on the iconic Mount Paranoma Circuit. The Bathurst Legends features a unique track format that utilises a crossover bridge, creating a more exciting racing experience.

7 more different track settings can be customised using different angled track pieces and accessories included. This track spans a wide total distance of 676cm. With that long of a length, an area of 2.8 x 1.4m is needed to accommodate the track.

In this set, races can be initiated between the Holden Torana, famously driven by Peter Brock and the Ford XY Falcon, a car that was utilised by Allan Moffat. With the inclusion of hand held speed controllers, this set is easy for entry-level racers.

For more customisation options, pieces from the Scalextric Sport line can also be added. 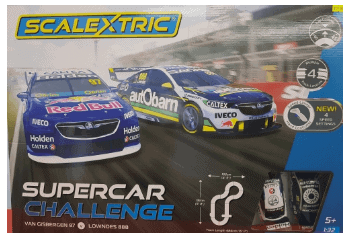 Through the Scalextric 1/32 Supercar Challenge which is exclusive to the Australia market, players can roleplay as Shane van Gisbergen and Craig Lowndes and reenact an exemplary race in Australian Motorsport. In this set 2 1/32 Holden Commodores are provided.

These 2 racing slot cars are equipped with Magnatraction technology, allowing more traction which keeps the cars firmly situated on the track. The track can be rearranged into 4 different configurations and is best suited to 2 car usage only.

Depending on the format, a maximum of 484cm can be expected for the overall length. If desired, the track can be situated with a mechanical lap counter to keep track of the rounds and guide flags that indicate where to travel.

Racers can employ the controllers to speed up, slow down or make incredibly sharp turns. 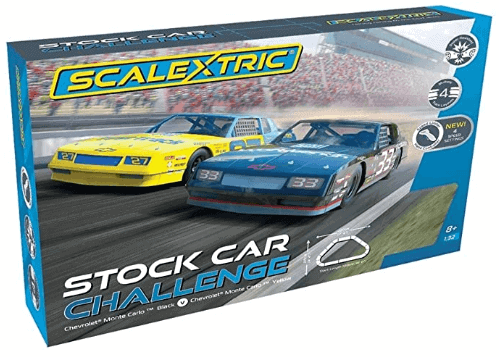 Both these cars are 1:32 in scale and are engraved with realistic and intricate details, perfectly matching the physical stock cars.

These cars are also designed to withstand pressure on the track. Racers can compete on the 484cm track which can be set in 4 distinct presentations. As there are only 2 lanes, up to 2 cars can compete simultaneously.

This set is catered towards both beginner and more experienced players with the addition of 2 wired controllers. These controllers have 2 settings, one for slow racing and the other for faster speed. 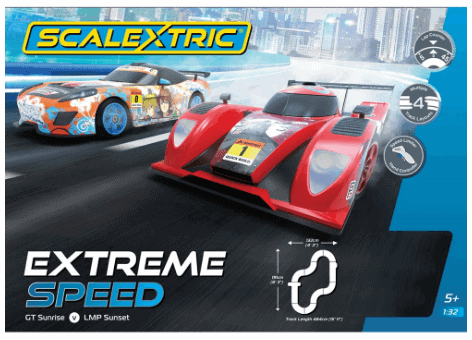 This Scalextric C1406 car slot set is an ideal package for racers who enjoy long distances. Almost 5m of track length is provided and there are 4 ways one can arrange the layout. This set comes with a 1:32 GT Sunrise, a car known for the bright and colourful anime print.

Additionally, this product is also inclusive of a vivid red LMP Sunrise at a 1:32 scale. Both these cars are constructed out of ABS plastic, providing durability on the track. There are no working headlights and rear lights which is ideal for younger children who may be prone to accidents.

There are 2 special controllers that come with this set that have 4 speed settings, enabling people with different levels of experience to play. A myriad of options can make this set more unique like setting up the included lap counter. 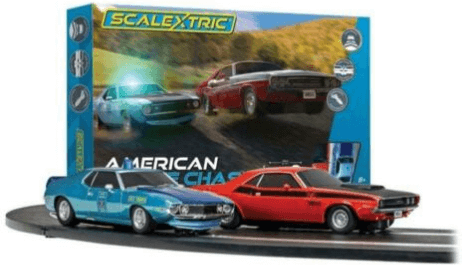 This Scalextric set is meant to mimic the thrill of being chased down by a police car. With the addition of an incredibly long track that extends for 532cm, hours and hours can be spent racing. A space of 210 x 140cm is suggested to accommodate the set.

A Dodge Challenger in a bright red finish competes against an AMC Javelin police car, both at 1:32 scale. These cars are about 15cm in length and are part of the ‘Super-Resistant’ line from Scalextric, meaning that endurance is a key characteristic of these cars.

Additionally, the AMC Javelin comes with working sirens and flashing lights, creating a realistic police chase. To start races, players have the choice to use speed controllers that are specifically designed to mould to different hand shapes.

A variety of layout options are available with the additional of track pieces bought separately. 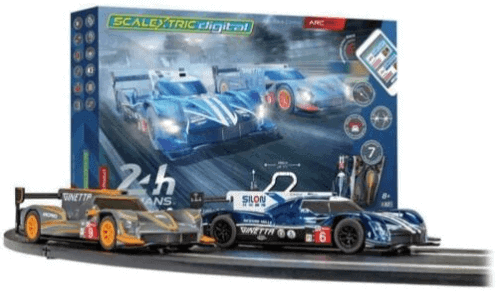 BUY ON AMAZON
BUY ON EBAY

This top of the line set from Scalextric features a track that has 7 different layout configurations for the 2 Ginetta cars to race on. One is available in a matte grey and orange finish while the other is in metallic blue and black scheme.

Both cars are smaller than the average 1:32 car, with a length of 145mm. Both Ginetta cars also have working lights to further replicate a real racing experience.

The track spans for 532cm and is compatible with the ARC software to configure post-race statistics, tyre wear and pit stops. Other key features include lane changing pieces and a light start.

There are wireless rumble controllers to set the tone and speed of each racing car. This set utilizes current technology to curate wireless racing experience due to the ability to connect to ARC software.

In my opinion, after owning a few sets myself as a child and more recently as a father for my own son, the ARC Pro series is definitely the most fun, due to the 7 different track layouts (compared with 4 in most other sets) and the integration with the mobile smartphone app.

You can configure pitstops, as well as monitor your tyre wear and make rules that must be followed. Additionally you can check the post-race statistics such as fastest laps, number of laps etc.

The ARC pro series also comes with wireless controllers, with built in rumble features which allows for tone and speed noises to come from the controller. You can also sit on the couch, rather than on the floor like the wired controllers.

Additionally you can setup multi car racing with up to 6 cars, lane changing, which is simply not possible with a normal version, which supports 2 cars.

But this comes at a cost, the ARC series is double the price of a standard set. To put it in perspective, the Le Mans ARC edition is around $500, whereas the Supercar Challenge set is $200 - $250.

If you want to make your tracks longer, both sets ARC and Non-ARC allow you to purchase extra track but the ARC pro series is far more expensive. Most consumers don't need to buy extra track, as the 5m track is long enough.

Most of the box sets have a track length of around 5m, or 530ish cm. It's rare to find a set longer than this, although the Bathhurst Legends is 6.8m and the longest box set out there. Ultimately the cheaper sets have a shorter track length.

Most buyers aren't too worried about track length, as it keeps their kids entertained and is easy to pack away after use. Longer tracks, take longer to setup and longer to put away.

My first set was huge, my dad spent a fortune on extra track, and you can definitely do the same. Buy a standard box set and then find a retailer that sells addon track.

You can expect to pay around $40 - $50 per extension pack. Scalextric actually offer 10 default packs themselves, as well as options that come with racing curves, borders, barriers and lane changes. Pack 4 is the straight line which retails at $27.99 USD.

The problem we found was finding a local Australian retailer that stocked the track extension packs. One retailer on eBay.com.au, that ships from the UK was all we could find.

In my opinion the best Scalextric sets Australia has to offer is the ARC pro series. However these are expensive sets, but offer way more features such as digital connectivity with your smart devices.

If you're buying a gift or a stocking filler, any of the series can offer endless fun your son or daughter, or adults a like. In terms of my favourite cars, I actually like the Supercar Challenge, as the Holden's look really good!

But if I was a kid growing up, I'd like the Lamborghini's in the ARC Pro Original and convince mum and dad to buy that one!

Be sure to checkout these similar guides: