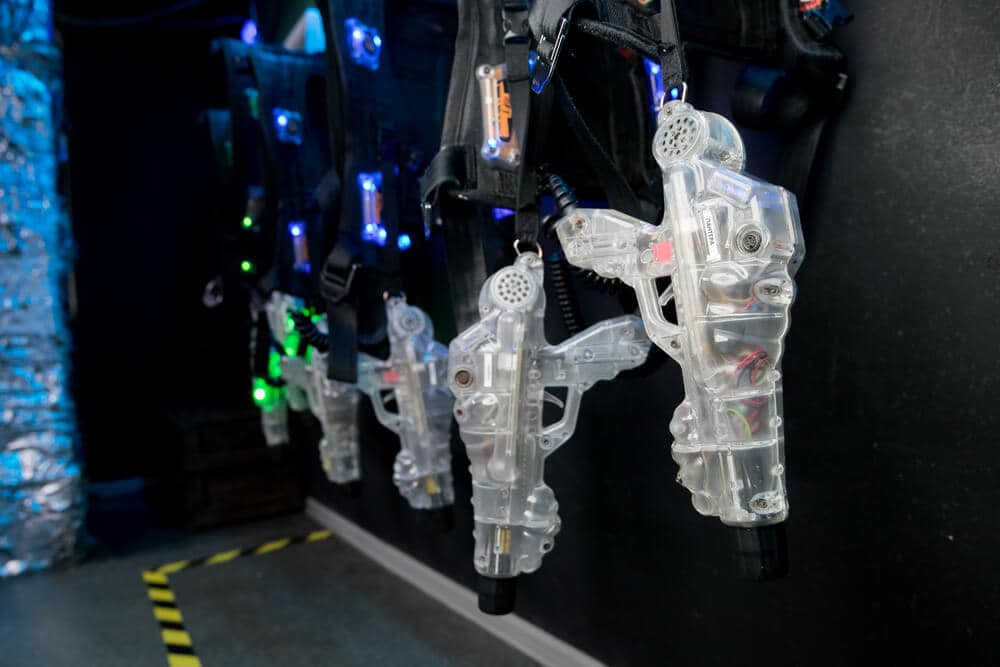 Laser tag is the closest thing to featuring in your own video game and stay at home laser tag games are perfect for the whole family to enjoy outdoors or in the house when it's dark.

Forget heading down to the local laser tag area, bring the game home, with these 5 best laser tag game sets available to buy in Australia. 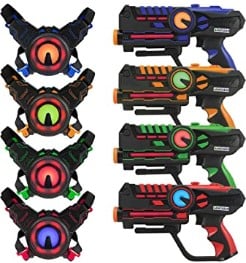 The ArmoGear authentic InfraRed Laser Tag Mega Set is fun for the whole family or a great idea to make a party hit top gear. This is a game which can be played by up to four players.

The pack includes child-safe laser tag blaster guns and target vests for the ultimate immersive laser game away from a computer screen or gaming arcade.

This is the most advanced set of laser tag blasters out there.

The laser tag blasters can switch between Shotgun, Machine Gun and Rocket for even more power and fun. And they vibrate and make lifelike shooting sounds for real-life simulation, just like you experience in a computer game. The target vests receive hits.

Players can turn on Invisibility Mode to hide their location from their opponents. A night vision flashlight can help you to find other players in the dark. And clear voice-guided directions guide you through the game.

The blasters are designed to fit comfortably in the hand of even a young child of 8 years old and upwards. And the infrared laser signal emission is rated at 0.9mW which is totally safe for children. 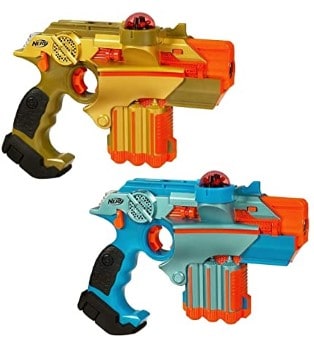 Nerf Laser Tag Phoenix LTX Tagger 2 is the best laser blaster game for players aged 8yo and over. Ideally suited for outdoor play, the set includes 2 Phoenix taggers which use real infra-red lasers and react with real-life simulated lights, sounds and vibrations when you shoot or when you’re hit.

Shaped and feeling like a real gun, the tagger has a recoil feature which engages whenever it’s fired. And it has a rumble pack which lets you know when you’ve been hit. They have a great shooting range (reports say up to 50 meters) and good accuracy.

The guns can be pre-set with the number of options, such as indoor/outdoor mode, shot numbers per match, reload function, solo vs team mode etc. You can expect a little noise – this is not a quiet game!

Purchase extra sets to play with more people at parties or when you’re just hanging out with friends. It’s a high-energy fun activity which you’ll be hooked on as soon as you start playing.

This is a game best played outdoors where you can hide behind bushes and rubbish bins etc and run around large spaces. The taggers use rechargeable batteries (not included with purchase).
This game is made with high-quality durable plastics and has been designed to last for a long time. 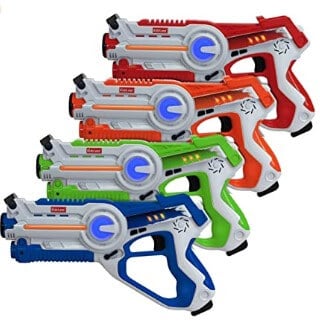 The Kidzlane Infrared Laser Tag Mega Pack is a set of four taggers for up to four players, so it’s an excellent buy for a family at an excellent price. The taggers use real infrared lasers but they’re absolutely child-safe at 0.9mW. However, the game is recommended for those over 8 years of age.

With different colour tagger guns, the game can be played in teams or one-against-the-others.  There are four gun modes: Pistol, Shotgun, Sub-Machinegun or Rocket.

Amazingly realistic (and super loud) shooting sounds and laser signal emissions make for a really immersive action-packed game. The taggers light up and vibrate in play and can shoot up to 130-feet away so this game is definitely best played outdoors.

The guns also have a different range of life bars, available shots and available sounds just to mix up the game a bit. Their design is realistic with a firm trigger action so it feels like a genuine pistol in the hand.

This is a great Christmas or birthday gift for that special boy – or girl – or even a bigger kid! And as a pack of four, it's immediately a game for the whole family. 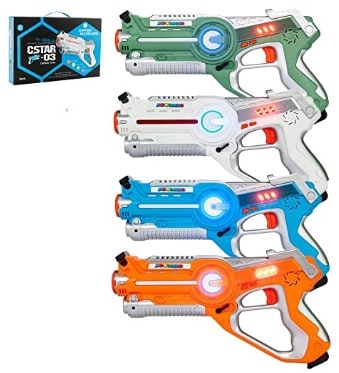 Coming in a pack of four, the JOYMOR Laser Tag Gun Set is a great gift idea for a kid (small or big) at Christmas or on a birthday. It’s straight away ideal as a family game, a party game or just ready for those days when friends come over for a get-together.

The game can be played by up to four teams by choosing colours for selecting team members. You can’t shoot your own team members. Each tagger (gun) has four modes: Pistol, Shotgun, Machine Gun and Rocket Launcher.

The number of bullets you have and lives lost when hit depends on the gun mode you’ve chosen. And each mode has a different life-like sound. They have a great range as well. The Instruction Manual sets the precise rules of the game in more detail.

Real infra-red lasers are shot from the taggers – they’re totally child-safe at 0.9mW. And the sounds are both realistic and loud, very loud! They use 4 x AA batteries (not included with purchase). And they’re made from durable and sturdy plastic.

This is an inexpensive gift idea. It takes the kids away from their screens whilst still allowing them to experience the gaming experience. They’ll be running around in the fresh air of the garden with their friends or family and having loads of fun. 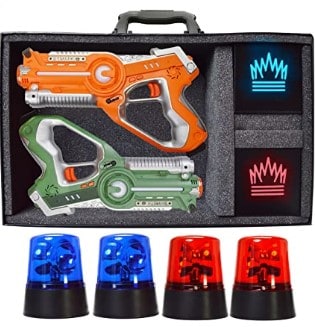 Dynasty Toys most recent Laser Tag game is their Stealth Pack (Model No T1507) ‘Capture The Flag’. The pack includes two laser tagger guns (in new colours and more durable) which are totally compatible with all previous models from Dynasty Toys.

There are also two Team ‘Flag’ Cubes and four Team Boundary/Base Lights. The Capture The Flag game is an amazing experience, especially outdoors on a large open play area in the fresh air with your friends. It can be played solo (ie two players) or in teams with large numbers.

Each team has a Cube (red or blue) which has a certain number of lives. The players all have tag guns which need to be set to their team’s colour. The Tag Guns are used to hit the opposing team’s hidden Cube, taking a life away when they make a hit. You can’t hit a team member’s Cube.

Each player or team also has two Boundary/Base Lights which, one red and one blue. The red one is a Jail Light, and the blue one is a Home Base Light. These lights control the teams’ movements.

Clearly, that is just a basic explanation of the rules of the Capture The Flag game. Full instructions are provided with the pack. But this is a truly fun game for as many players as you have available.
All materials and the infra-red laser signal emissions are safe, with the laser signal measuring .0496mW).

Laser tag doesn't have to be just for kids and there's many things to consider if you want to purchase something feature rich for yourself or to add to any party idea.

Performance: Laser tag guns are portable and often lose power pretty quickly. You probably don't want to stop every 20 minutes to recharge your batteries, or worse, replace batteries. Choosing a high performing laser tag set is crucial to playing for longer. Some sets come with batteries that can last up to 3 hours, while others only last 20-30 minutes.

Quality: You'll want to choose a laser tag set that comes with a high quality material. There's the cheap plastics that will break the moment their dropped, as well as reinforced plastics that can withstand a good beating. Generally the more you pay, the better quality of materials used.

Price: There's a wide variety of prices out there. Ultimately it comes down to the number of sets in a box and whether they come with chest sensors or just gun sensors. You can also expect to pay a premium for fancy features and longer laser ranges. A rough guide price is around $30-$40 per gun, with top end games costing upwards of $50-60 per gun. 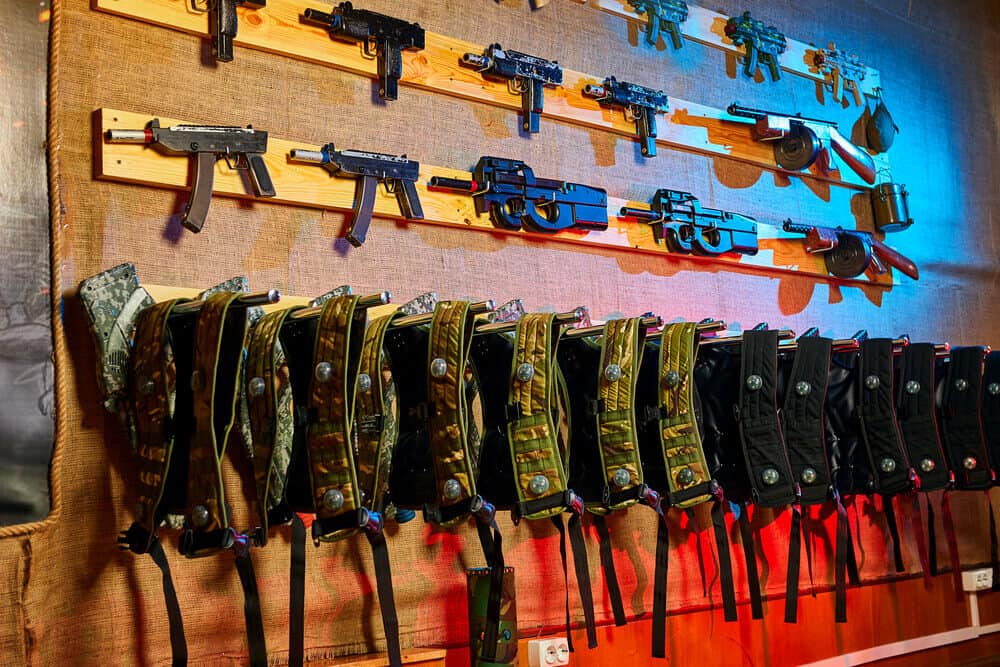 Features to Look For In Laser Tag Sets

Depending on the size of your family or how many friends your children have you'll need to decide how many gun blasters to buy.

Most commonly is 4 per set, however you can buy smaller sets with 2 guns, as well as larger sets with 6,8 or even 12 blasters. It's difficult to buy expansion packs for certain sets so better to buy a bigger set and not need them for a while than to buy an entire set that can't be expanded.

Some laser gun sets come with lighting and sound effects that can make your game much more enjoyable. Where it's an option, I'd definitely recommend choosing a game that comes with these sound effects. It will provide noise when you fire your gun as well as successfully hitting a target.

Some sets allow you to turn off the sound effects while others don't. Older kids may not want the endless sound effects so be sure to check what's suitable for your requirements.

Some sets allow you to switch between different weapons modes such as using a pistol, rocket launcher, shotgun and even a machine gun. These have various levels of impact on your fellow competitors and can make games different every time.

You'll usually have to pay a premium for switching weapons but for longer playing, it's definitely worth upgrading to a model that supports this.

You'll want a laser set that's easy to use, especially for younger kids. A simple fire button and the ability to change settings with a visual acknowledgement is ideal. Some sets that come with vests can be uncomfortable so sets that come with a sensor that can be attached to your own clothes is another option.

You probably want a gun that's easy to hold but isn't too heavy. It needs to be a little heavy or else it will just feel like a cheap toy and that's not what you want.

You'll want something durable, but most models are made out of plastic. You can of course get higher grade reinforced materials which will ensure the guns don't break when they are inevitably dropped on the floor or stuffed away in storage for a few days.

Q: What is Laser Tag?

A: Laser tag is a recreational shooting game where light guns that eject infrared beams are used to shoot sensors on other opponents devices, registering hits and keeping a score for a set period of time. At the end of the game, the highest score wins. Games are usually played in an area, but can be played at home in the cover of darkness.

Q: How to Play Laser Tag?

A: You'll need a minimum of 2 players to start a laser tag game however you can play with up to 12 or 24 players depending on the size of your set. You'll each wear a chest mounted sensor which is connected to your light gun.

You then start the game, before shooting each other, aiming for the sensor on the vest or t-shirt of your opponent. After a set period of time, the winner is confirmed by total number of hits.

The aim of the game is to shoot your opponent while protecting your own sensors from being hit. This involves stealth and hiding behind doors, walls and any other suitable object. Rules are in place to avoid camping (staying in one place) and covering your sensor. Additionally no physical contact between players is allowed.

Some people create their very own laser tag arena's but for home owners you can play under darkness outside or inside. Batteries need to be charged regularly so ensure you've got a laser tag set that comes with a decent battery life for more fun!

A: Laser tag users infrared beams which are the same type used by a TV remote, so it's completely safe for kids and children to use. Be mindful and teach your kids to aim for the sensor, rather than the face however there's no damage caused to eyes by these family friendly laser sets. 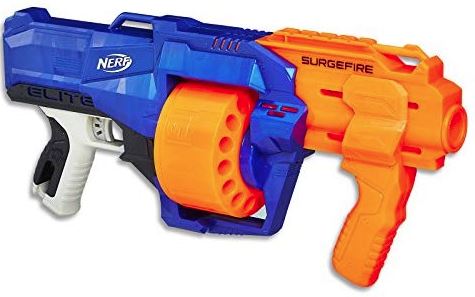