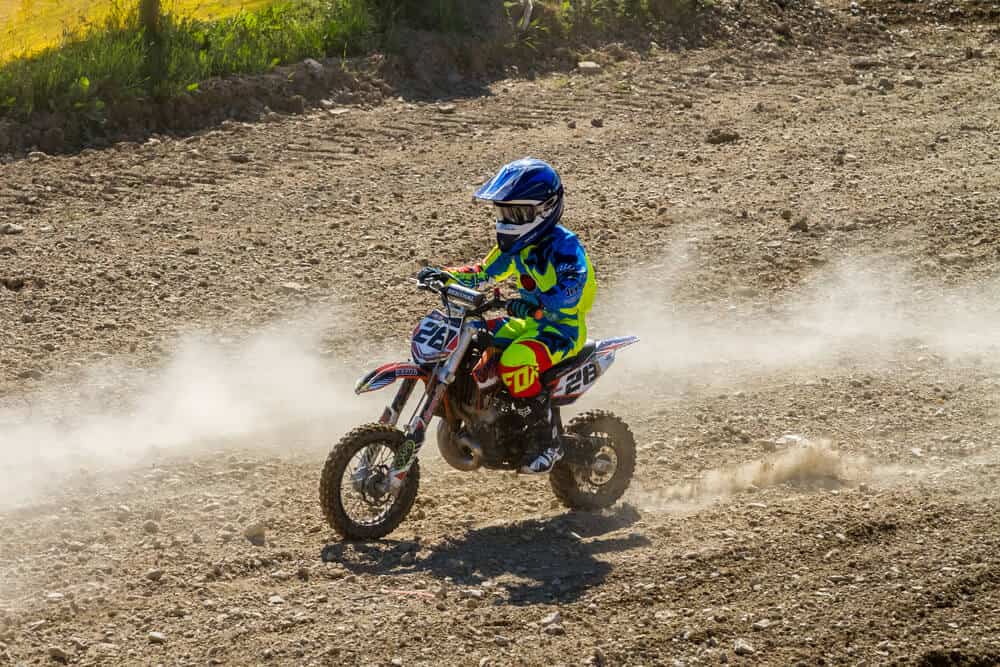 Pit bikes and mini dirt bikes are a great alternative to buying brand name bikes, often costing a fraction of the cost, but offering the same great components and top speeds.

We've decided to look at five of the best pit bikes available to buy in Australia. These mini dirt bikes are all 110cc - 190cc in size, offering up to 100km/h and are perfect for kids, teenagers and even adults to blast around the farm or off-road trails.

A perfect way to get into dirt biking without the high costs, it can be confusing which models to choose, so we've provided a buyers guide below to help you as well. 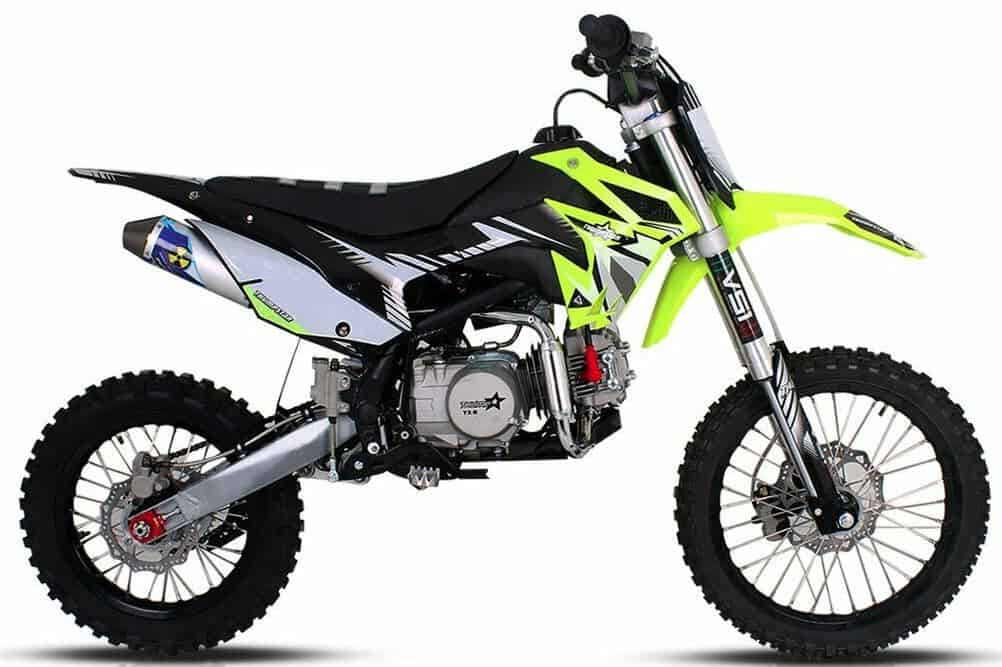 Thumpstar is a serious contender when it comes to creating the best pit bikes, dirt bikes and motorcoss bikes and the TSX 140cc is a great pit bike. Packed full of features, it looks lean and mean in the black and florescent yellow styling.

This model offers an impressive 11HP engine (at crank), 4 speed manual gearbox, a kick starter and a Mikuni VM22 26mm carburettor. A top speed of 90km/h is achievable based on recommended gearing. The suspension includes front inverted forks and a rear VS1 mono shock.

Both front and rear disc brakes with a dual HSK piston upfront and rear single. The front wheel is 14" while the reader is 12", both of which are AK7 branded. The wheelbase is 126cm and the seat height is 83cm, making this a good pit bike for larger riders such as adults.

The tank comes with a 3.4 litre capacity, offering plenty of juice for long rides. The bike sounds great thanks to the new Pipe Bomb 2.0 head pipe that results in a greater bottom and low end response while keeping the top end reasonable too. 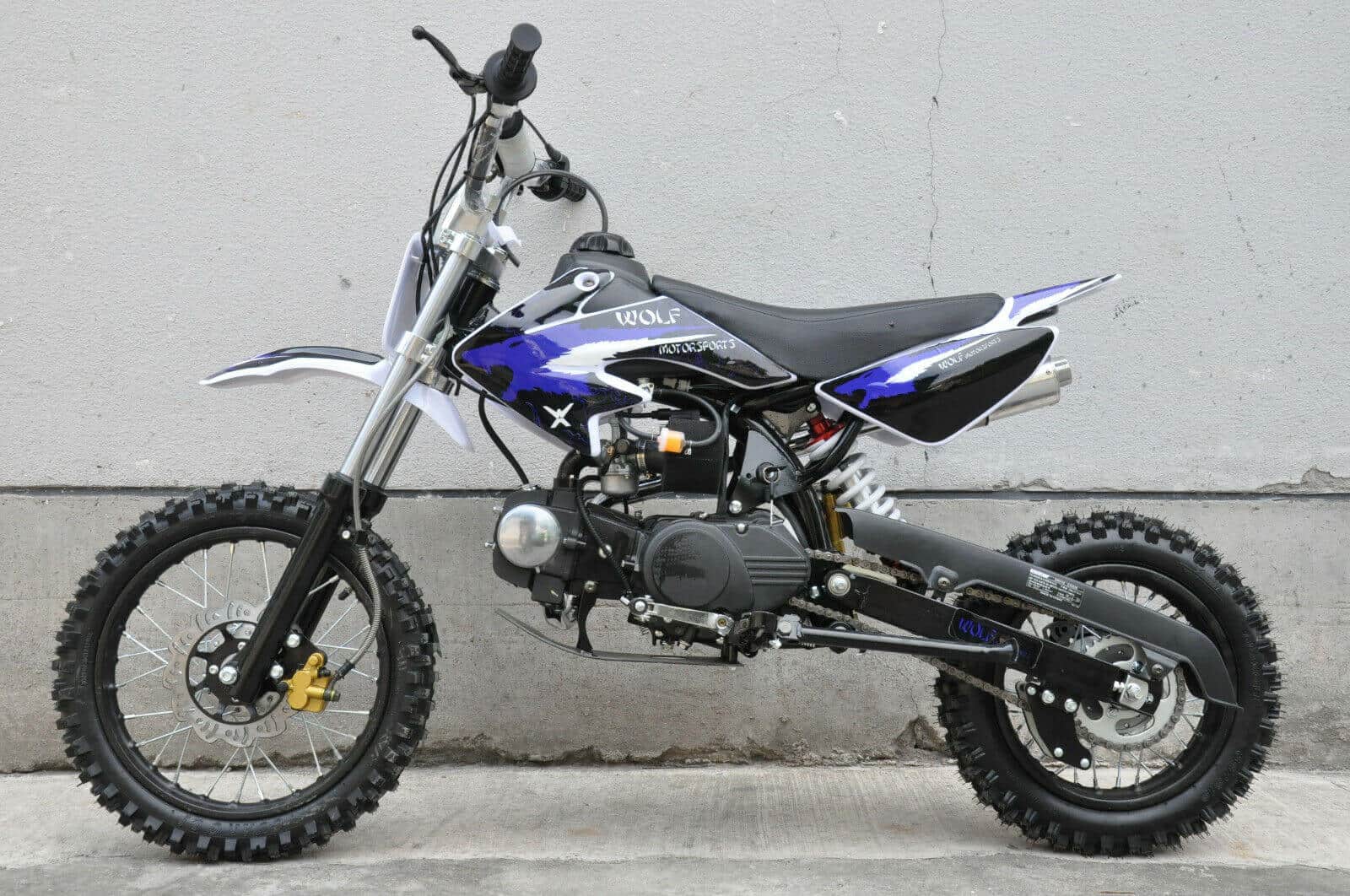 Motoworks has been manufacturing and selling pit bikes and mini dirt bikes for as long as I can remember. The 125cc is probably one of the best models, offering high speeds and a lot of bottom end torque.

At half the price of the Thumpstar we recommended above, the 125 motoworks is more budget friendly, yet still offering a well built product.

Powered by a SHINERAY 125cc 4 speed manul engine, it's kick start and offers front suspension forks and a rear shocker. Disc brakes on the front and rear, accompany the large 14" front and 12" rear wheels. The seat height is 78cm high, offering comfort for larger riders.

A 3 litre tank provides plenty of run time and it's powered by straight unleaded petrol. In terms of safety it comes with a kill switch, engine bashplate and chain guard. There's also a built in stand.

Max load is rated for 90kg which is 10kg higher than the Thumpstar, but the top speed although rated at 100km/h is quite optimistic. It's available in a range of colour schemes. 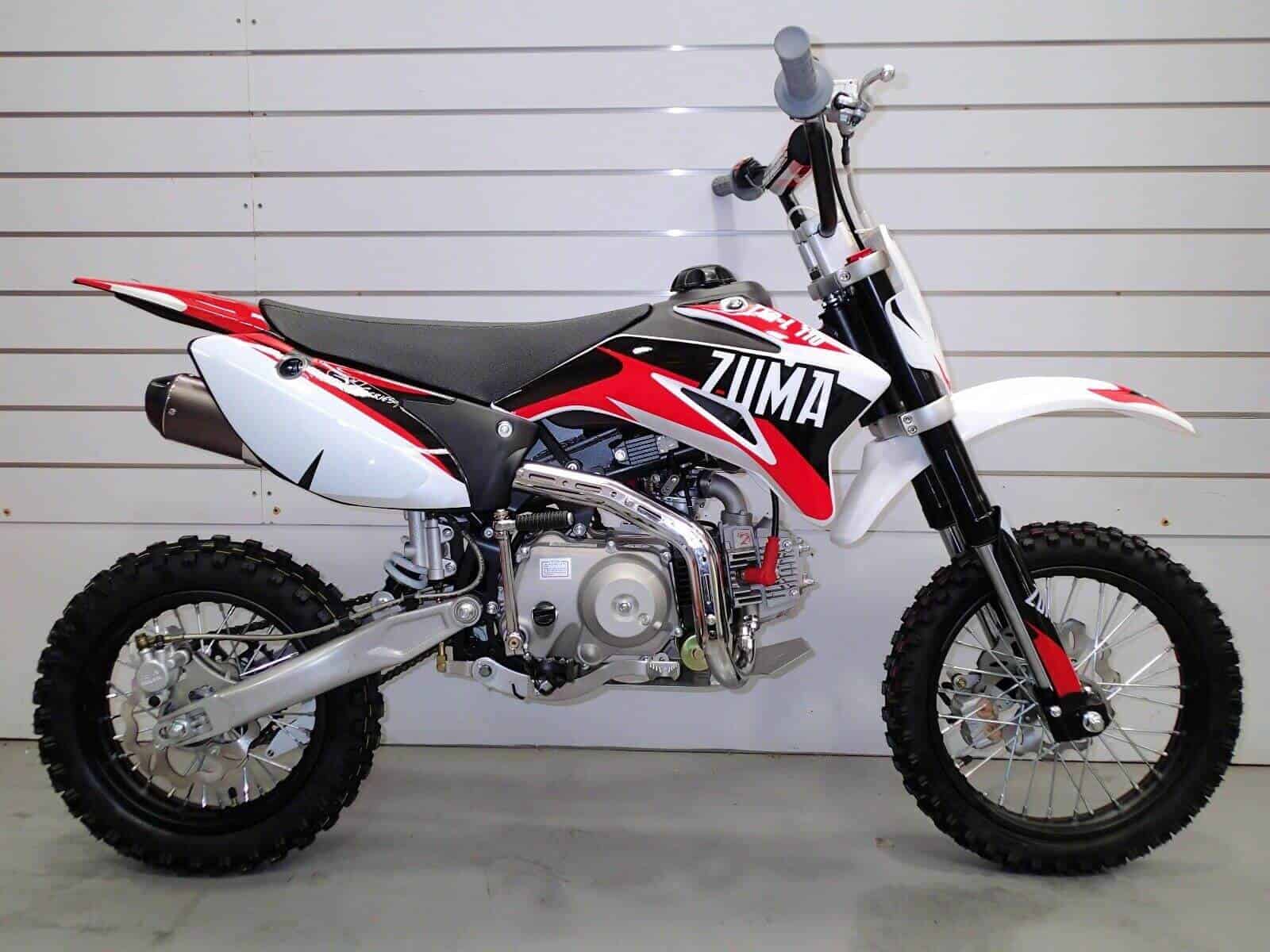 Zuma claims to offer the best all round mini dirt bike in the market, in the form of their TTR-L 110 bike which offers an electric start, kick starter as well as a lively 110cc 4 stroke engine.

The transmission is a 4 speed semi auto which offers a wide variety of gear ratios no matter what terrain you're using on. Powered by unleaded 91 or 98, it's capable of a top speed of 80km/h and has a fuel capacity of 4 litres, which is plenty of juice for hours of fun.

Wheels are 12" rear and 14" front, and this is accompanied with disc brakes. Up front you've got an oil dampened inverted fork while at the back is a mono shocker.

Height of the seat on the Zuma is 78cm and it's rated for a max load of 75kg which is a lot lower than other models.

Built to high specifications and available in a number of colour schemes, it's definitely an affordable 110cc pit bike for the kids and adults a like. 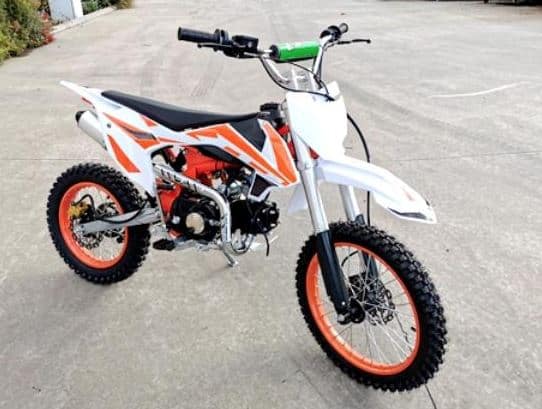 If you're looking for a pit bike with larger wheels then the 125cc pit bike from MJ Motor might be a contender. Offering 14" rear and 17" front wheel's, it brings the seat height up to 88cm which makes it more comfortable for larger riders.

The bike comes with various colour schemes, with orange and white being my favourite. On offer is a kick starter, electric start and a 4 speed manual gearbox. In terms of suspension you've got a steel swing arm, USD front forks and a spring rear shock.

Both front and rear brakes are disc brakes and with a 3 litre tank, you've got plenty of juice for hours of fun. The bike runs on unleaded 91 and 98.

MJ Motor hasn't provided a top speed on this model however we'd assume it's around 50-80km/h inline with other 125cc dirt bikes. 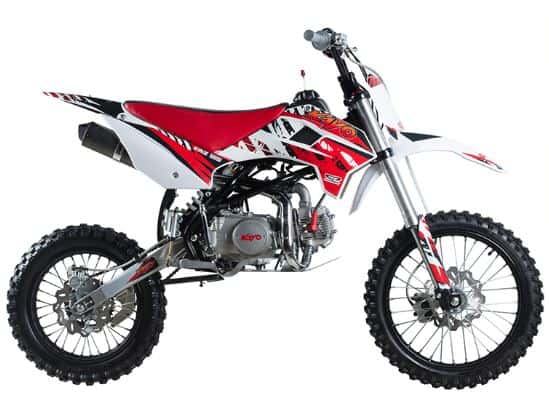 This mini pit bike comes from the USA brand Assassin and offers a powerful 125cc 4 stroke engine with slightly higher max power and torque than other models listed above.

The bike offers a kick starter only, but comes with dual front and rear disc brakes. A large 5.5 litre fuel tank gives you enough juice for plenty of riding. The bike runs on 91 and 98 unleaded.

While the top speed hasn't been published, it does come in a range of colours. Assassin also offer various bikes ranging from 50cc, 70cc, 110cc, 140cc, 190cc and 250cc. They also offer electric pit bikes for those looking for something different.

How To Choose Best Pit Bike To Buy?

When it comes to choosing the best one for your needs, you should look at the various features.

Most pit bikes come with a 125cc 4 stroke engine however more expensive bikes may come with a 140 or 190cc engine. These bikes are also commonly referred to as mini dirt bikes. Smaller bikes will come with 2-stroke, 49cc engines.

Pit bikes are designed to be simple to maintain so they nearly always come with a single cylinder, air-cooled engine. Most of the smaller models will be 4 speed manual while smaller bikes may be 1 speed auto, as it's far too difficult to incorporate a clutch and lever in their small size.

Most 49cc pit bikes operate on a mixing system with petrol. This is usually 25:1. Unlike a 4 stroke engine you can't simply use petrol from a gas station. Think of them like a lawn mower or 2 stroke engine, you need to add oil to the fuel.

Nearly all pit bikes offer a pull starter however some of the more expensive models may come with an electric start. Pull starters do break from time to time, so you can usually pickup a replacement on eBay for under $50.

The industry standard for pit bikes is now disc brakes that are usually found on the front and rear, much like a normal motorcycle. Of course cheaper bikes will likely have been made with cheaper materials.

As all bikes are designed for off-road use, be sure to test brakes before going full throttle to see how responsive they are.

Suspension is usually a single shock rear shock and a front shock. You may find some models come with a double shock.

Most pocket bikes come with a max load rating and this is usually between 100-120kg. However the optimal rating is usually much less, around 50kg. To get those top speeds you'll need to be under the optimal weight rating which is why kids will always get faster speeds than adults.

Following on, subject to your load, you can usually get speeds from 40-50km/h. Some models offer speeds of up to 80km/h which can feel twice as fast given your close proximity to the ground and the tiny frame beneath your crotch.

Can you fold your knees while sitting on a 60-80cm high seat. That's what the average seat height is on a pit bike in Australia. If you can't you might need to look for a model that offers a higher seat, such as the big wheeled pit bikes.

Not all pit bikes have enough power to handle rapid inclines especially the 49cc models. The average supported gradient is around 15-20 degrees so check to see what rating your pocket bike has especially if you've got a hill on your driveway. 125cc bikes will have no problems with hills.

Can your son or daughter lift the bike if they fall off? The average weight is around 20-25kg for 49cc models but some larger models may be up to 30-40kg which is too heavy for a child to push back up by themselves. If they will be riding alone, a lighter bike is much safer, especially if it falls on top of them.

Can you attach training wheels to the model you're buying? If it's for a new rider these can make learning much more safer. Is there an automatic kill switch or a remote control that a guardian can control? Is there a speed limiter? These are all possible on more expensive models but less common on the cheapest pocket bikes.

How to setup a pit bike for use?

If your 49cc model comes with a 2 stroke engine this means the petrol must be mixed with 2-stroke oil. The ratio between petrol and 2T oil is 25:1. You need to make sure you're using motorcycle two-stroke engine oil. 4-stroke bikes, should follow guidance from the manufacturer.

Before riding be sure to check the bike for any loose screws. Given the low price and the engine working overtime, from time to time bolts, screws, nuts and spokes can come loose, so be sure to tighten these up to avoid injury.

Also check the air pressure in the tires and that the chain is within scope. If it's not, then be sure to fix it before riding. You should regularly check the air filter is clean and chain lubricated.

Start the bike with a quick pull of the starter. If no dice, shake the bike and ensure the fuel is getting through the engine. You may also need to press the throttle to open the carburettor while attempting to start the bike. Lift the rear wheel and rev the engine if you've got an automatic. Lastly push the choke back down (if applicable) into the normal position.

Be sure to put on your protective gear. At a bare minimum this should be a helmet, even if you're riding off-road. Pit bikes are intended for off-road use only and aren't road legal.

You're now ready to ride. If it's your first ride, you'll need to break the engine in. Operating at a sensible speed during the first few weeks will increase future performance.

How to fix pit bikes?

Due to the low price, you can find spare parts that offer a universal fit on eBay. Most models offer similar sizes of common parts that are likely to fail through normal wear and tear. You can check sites such as eBay or Gumtree for these parts.

In the first instance go back to your retailer and ask for the parts, if they have them. If they don't they may be able to order them in for you, or recommend an alternative.

Given the cheaper nature of these bikes, some customers simply replace the whole bike when issues arise as it can be cheaper than sourcing spare parts and manual labour.

Pit bikes are a great way to get kids into dirt biking and learning how to use them safely on private property. They are also great gift ideas for teenagers and adults a like. They are ultra affordable and offer hours of fun, capable of high speeds and can even be used in competition racing. The question is, which one will you buy? 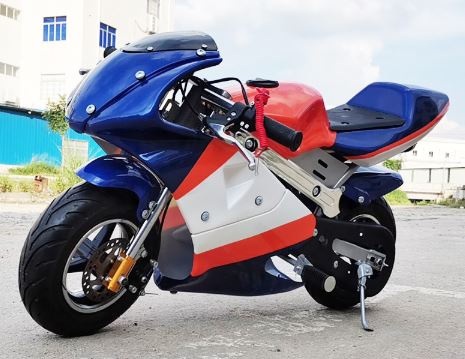