Everyone loves a good costume party, but struggles to come up with a costume idea that will make them look amazing, at an affordable price.

Today we're looking at the best online costume stores Australia has to offer with suggestions on outfits to give you some inspiration.

It was a hard process to narrow down, as we quickly found over 50 different stores, all reselling the same products, probably from the same wholesaler.

We used our strict 29-point business criteria to ensure stores are reliable and offer fast shipping, just in time for your next costume party. Plus if the size is off, how easy it is to return for an exchange or refund. 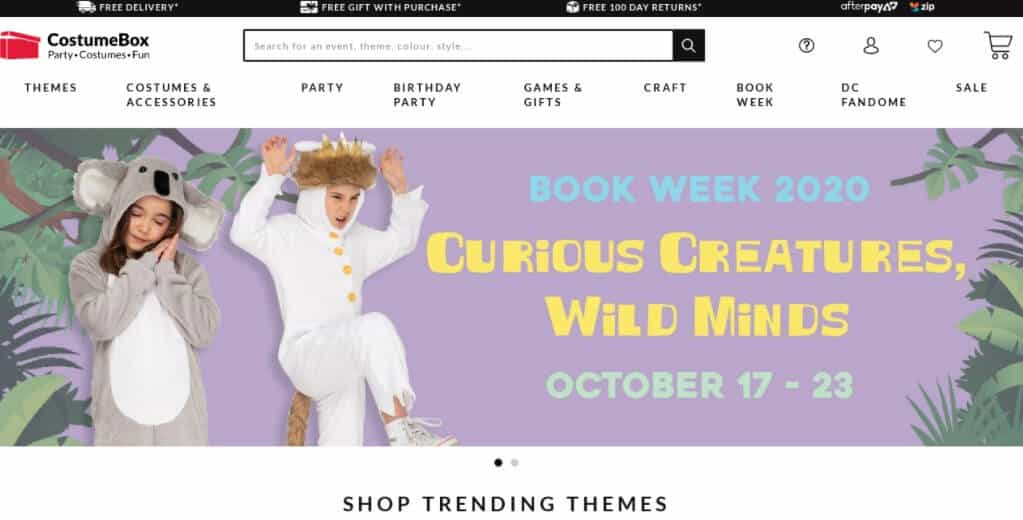 CostumeBox is an online platform that supplies costumes for various occasions, whether that be birthday parties or themed get-togethers. There are costumes from licensed movies such as Star Wars and the Harry Potter series.

Additionally, this store also specialises in party supplies such as baking accessories, lollies and equipment for crafts. This website is categorised into themes to easily find items that match that trope.

There is an incredibly wide selection of items to cater to different age groups in Australia, with sizes to fit both children and adults.

Price matching is available through contacting the customer service team and this store offers free returns within 100 days. Currently, there is a promotion that offers a free gift with a purchase of $40 or more. 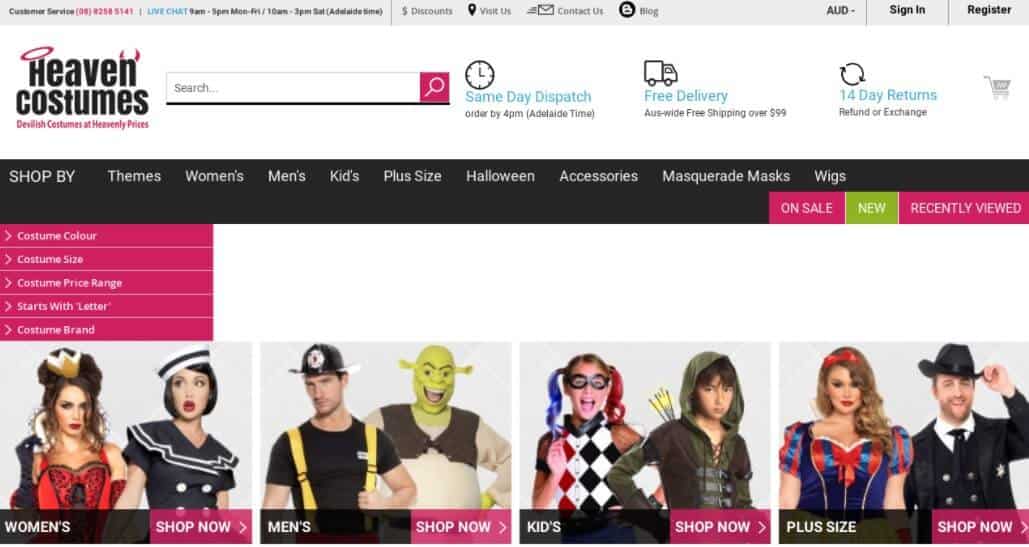 Heaven Costumes has over 20,000 costumes and accessories available to suit a variety of functions such as themed parties, book week for children and Halloween. This store has lots of different sizing options with a selection dedicated to plus-size people.

Besides clothing, Heaven Costumes also has contact lenses, glow-in-the dark paint and wigs available for purchase. The items in stock are also sourced out from authentic brands, instead of replicas.

This store also has a dedicated section on the discounts available, which is constantly updated. Bulk discounts may also be available for large functions such as school parties by calling a customer service representative.

This store offers same-day dispatch on orders made before 4pm Adelaide time, as well as free shipping for orders $99 or above.

Costumes is available to customers across Australia, New Zealand and Singapore. Besides conventional costumes, there are also licensed character outfits from franchises like The Avengers and Descendants which are ideal for children or movie enthusiasts.

Pet costumes are also on hand for both cats and dogs. Party supplies such as stickers, tableware, drink coolers and decorations are categorized, which makes it easy to navigate the website and instantly get results.

Over 350,000 customers have used Costumes and over 20,000 products are listed and available for purchase. StarTrack OnDemand services are available in Melbourne for same day shipping.

Currently, free shipping is available in Australia for orders $79 and above. There is a 30-day warranty for every purchase and incorrect clothing sizes can be exchanged. 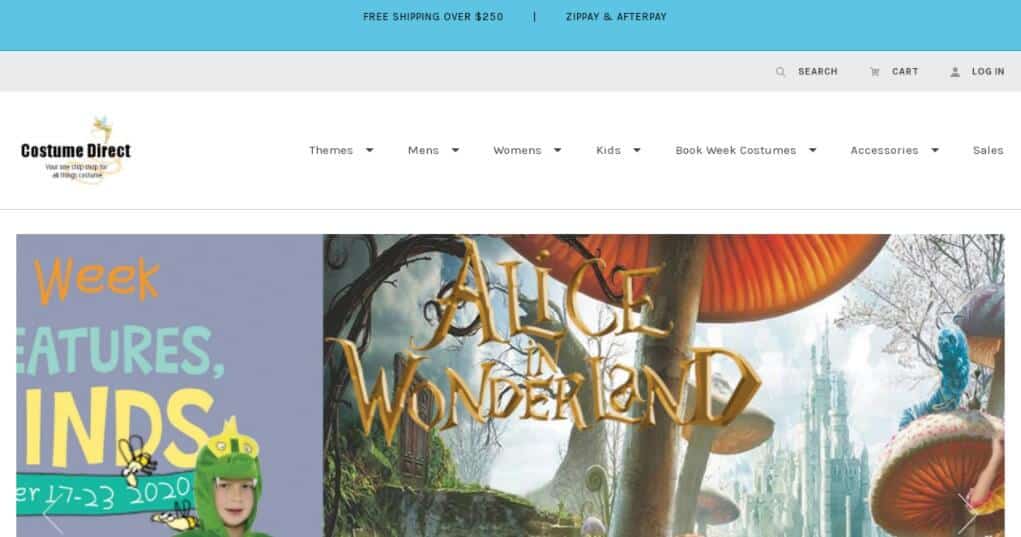 Costume Direct has a wide selection of clothing from Disney movies and more adult shows such as Games of Thrones, making it suitable for all demographics. Items are also categorized based on eras and occasions.

Accessories such as make-up, contact lenses and toy weapons can also be purchased. Besides outright buying costumes, some selected clothing is also available for rent. There are normally small, medium and large sizes available with some ensembles inclusive of sizing charts.

Costume Direct also has a page on sizing charts for both US and Australian sizes. Made-to-order clothing such as mascot costumes is also available for people who want a more personalised fit.

Currently, free shipping is available Australia-wide for purchases over $250. Costume Direct also has exclusive deals and discounts for members. 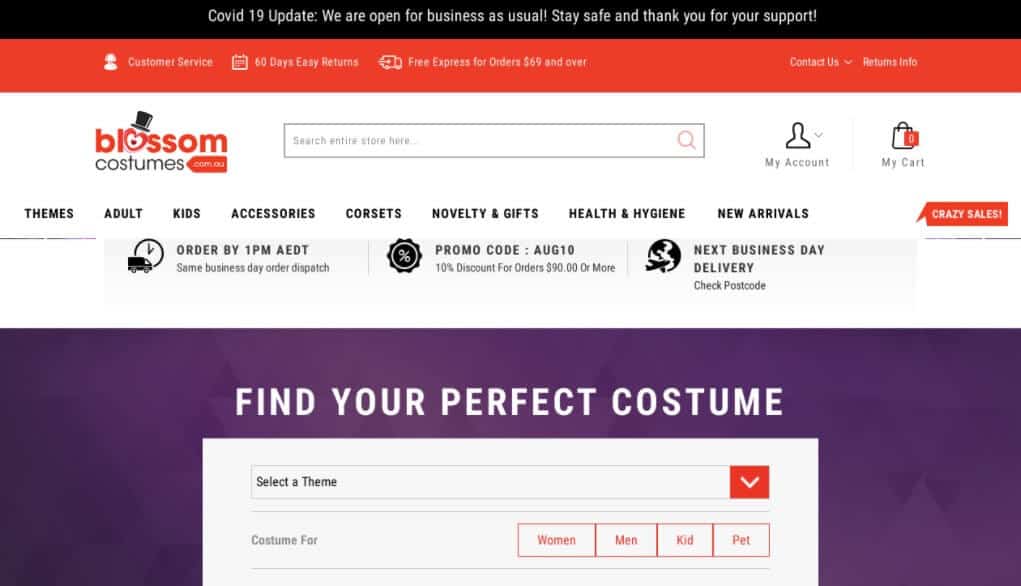 Blossom Costumes has various clothing options for different events like themed birthday parties. The ensembles available are also suitable for professional activities for people who work in show industries.

Blossom Costumes has a dedicated page on corsets and extra accessories. There are costumes available for plus-size men and women as well. Small novelties and party favours such as lava lamps and more adult toys can be bought.

Refunds and exchanges can be easily arranged within 60 days from the date of purchase. Overall, Blossom Costumes caters to both children and those leading professional lives in the creative world.

Costume Super Centre is a retailer that houses genuine costumes and accessories. Besides an extremely wide selection for both children and adult, there is also a dedicated section for pet costumes.

There are sizing charts for customers to select the most suitable size and plus-size options are plentiful for both men and women. In addition to clothing, Costume Super Centre has party decorations on sale as well.

Currently, purchases are only offered in Australia and does not extend to neighbouring countries like New Zealand. Free delivery is currently offered for purchases $69 or over.

First-time customers are also granted a $10% off coupon. This retailer has an active social media presence on Instagram, where deals and sales are advertised.

Smiffys is a family business with over 120 years of experience in the costume industry. Like conventional costume stores, there are both children and adult ensembles available to order.

Children costumes are inclusive of both conventional and occupational ones, as well as clothing from Disney movies and other licensed media. There is also a huge selection of wigs and small accessories in stock.

Many costumes are sourced from licensed brands like Smiley from the United Kingdom. Frequent purchasers can sign up for a newsletter which outlines current and upcoming promotions.

Sizing charts are also available but should not be entirely relied on as some costumes have their own size guides. Currently, Smiffys offers shipping to both Australia and New Zealand. Purchases $50 or above in Australia is inclusive of free shipping. 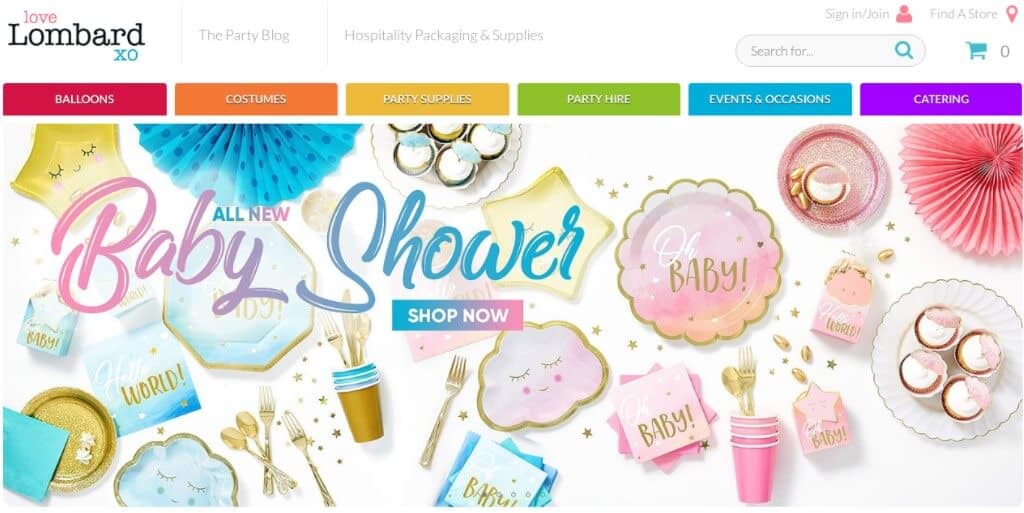 Lombard is a one-stop store for both clothing and party decorations. This retailer specialises in party supplies for various causal and formal events such as baby showers, football nights and birthday parties.

Additionally, Lombard also offers personalised balloon deliveries for those who cannot make contact in person. There is also a party hire service where everything from tableware, backdrops and photobooths can be hired for use.

Bulk catering supplies are also available for purchase with over 100,000 items to choose from. Catering items can be printed and customised for professional functions with services from Lombard the Paper People.

Lombard the Paper People is currently operating in Victoria, New South Wales, Queensland and Western Australia. Frequent buyers can sign up for the newsletter for deals and discounts.

Australian's love Halloween parties, and it's one of the most popular times of year for costume store owners. Additionally there is Guy Fawkes which is celebrated the week after.

Nearly all costume stores in Australia offer Halloween outfits, we actually explored well over 50 different stores when we put this guide together using our 29-point inspection.

Some of the best Halloween and Guy Fawkes costumes include:

There's 100's of other Halloween and Horror costumes you can purchase online, with most stores offering free delivery and a simple returns process, allowing you to try on the costume and return it if the sizing is too big or too small.

Nearly all the online costume stores we looked at today offer Oktoberfest costumes, ranging in styles from Gretl, Emillia to other German styles such as Gretchen Beer Maids, Bavarian for the ladies, through to Karl Authentic, Lederhosen and Kurt Lederhosen styles.

You could also go all out and get a full size beer bottle outfit such as the Boozer Beer Bottle, or the Lederhosen Megamorph mens costume, aka the sumo wrestler outfit.

You can save money on your costume by supplying your own socks, shirt and hat. If you want the full package you can expect to pay a little more.

Mardi Gras is an event celebrated in Spring Break in the United States. It's a lot less common here in Australia but some expats do continue the tradition and host parties. You'll definitely need a costume if you're invited to a Mardi Gras party!

Sydney hosts a gay and lesbian Mardi Gras party each year around February/March and is a colourful collision of creativity and culture from individuals throughout the community.

With all that colour, you'll need a costume such as a 70s, 80's and 90's retro outfit, a sequin tailcoat, a bright green or rainbow suitmeister or a sequin jacket for the men.

All the stores featured here today offer costumes for Mardi Gras, but we found an extensive selection on Costume Box.

Grab yourself a Guiness or three and head down for a day of drinking, singing and meeting other Irish expats and Irish fans from your local area. This day of the year brings out the Irish Rugby Shirts and the vibrant costumes, as everyone has a beer for St Patrick.

While a green t-shirt might suffice, you can go the whole hog and get a Leprechaun outfit, or go for something more adventurous such as an Irish Green Suit, the Cloud and Rainbow suit, a green Morphsuit or Mr Beer Keg.

Again we found all the stores featured above featured St Paddy's Day costume ideas, with Costume Box offering the largest selection with prices ranging from $40 to $150.

For those on a budget you can pickup a green hat, face paint, hair extensions, necklace, satin sash or wig for as low as $5 - $20.

Now you know the best online costume stores Australia has to offer, why not checkout some of our other related guides: