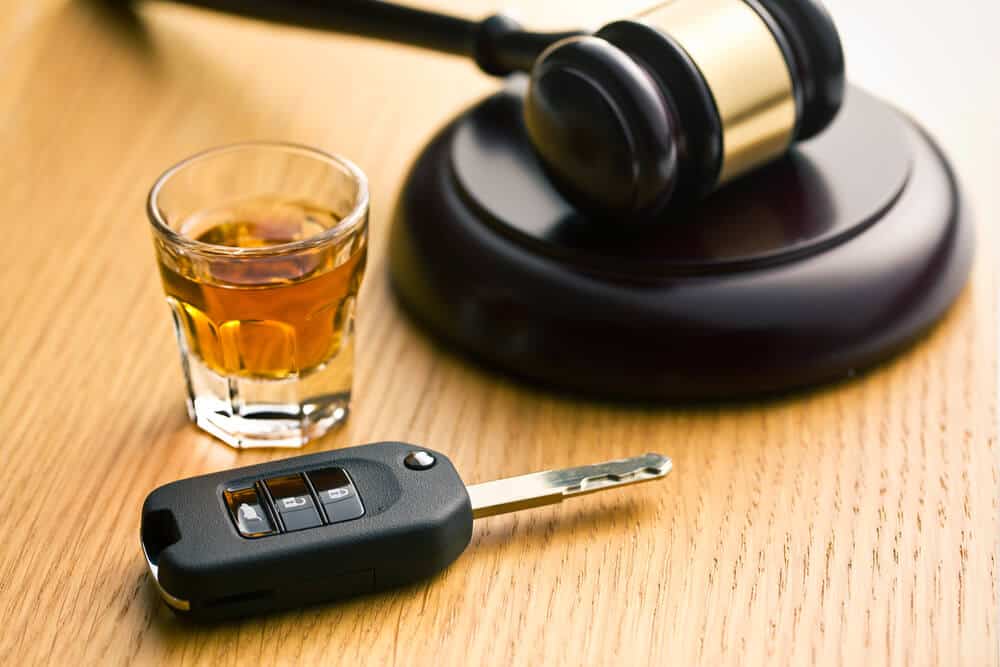 Sometimes we do unintentional, miscalculated things that we regret, and drink driving is one of those. But you can definitely help your situation by hiring the services of one of the Best Melbourne drink drive laywers, who can defend your case.

Drink driving is one of the most common charges to end up in court, which can result in disqualification of your drivers license, a substantial fine, interlock conditions and even imprisonment, so it's important to get a drink drive lawyer to defend you in court.

Many lawyers can help you, but you'll have a better chance of being successfully defended by choosing to hire a drink driving lawyer.

Today we've spent over 10 hours going through the best law firms in this space, by looking at their official websites, consumer reviews, history in court and services. 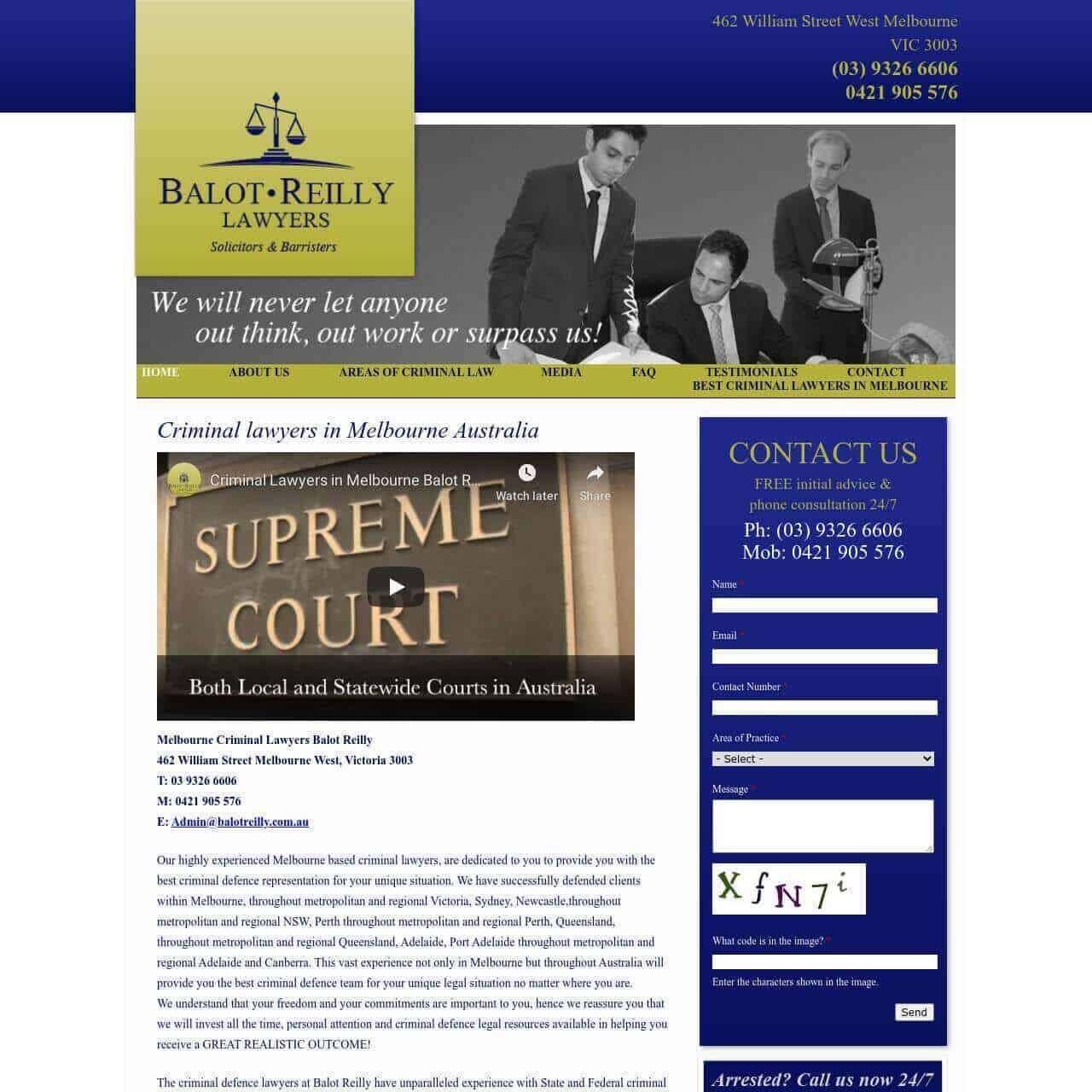 If you’re in need of criminal defence representation, BalotReilly Solicitors can help you to secure your future and freedom with experience, skill and a history of positive results in support.

BalotReilly’s criminal defence team has experience handling both state and federal criminal offences in a wide variety of categories including Drink Driving, meaning you can trust them to thoroughly understand your case and advocate for you.

Most importantly, BalotReilly are considered the best drink driving lawyers in Victoria and boast a client history of over 1000 drink driving cases in a range of situations and across the country.

Drink driving offences are taken seriously yet recognised as often unintentional and surprising for defendants by the BalotReilly team, whose extensive experience in the area will allow you to feel comfortable and respected in the presence of your lawyer.

Their trusted reputation for excellence among Melbourne criminal courts enables BalotReilly to work closely with Queen’s Counsels and Barristers to create the best and most justified legal outcome for you.

Customer reviews:
“George could easily have used the case to get more money out of me but he didn't waste time and put my interests first as the client. I'd recommend these guys to anyone who needs help with a traffic matter!” 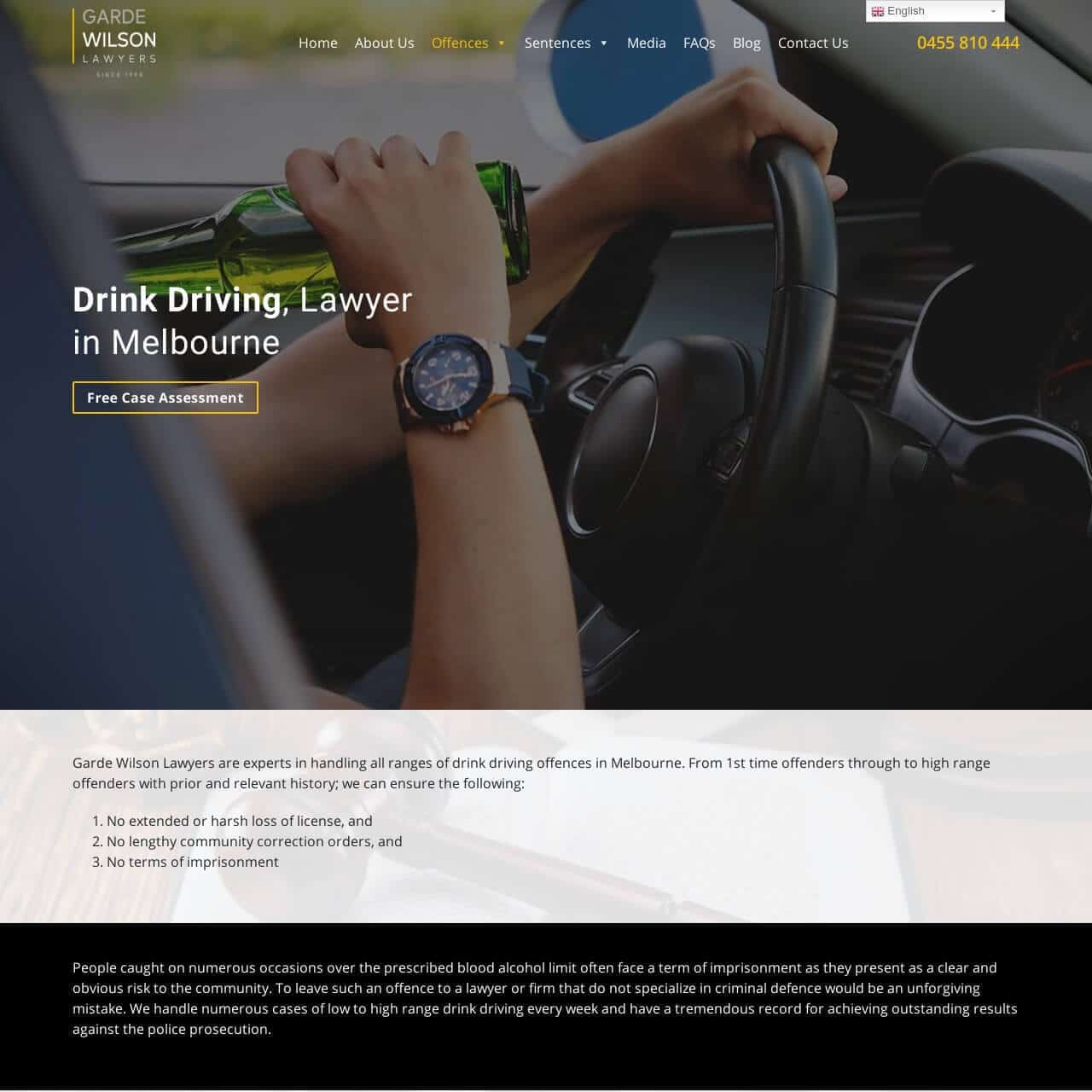 With over 20 years experience in criminal defence law and a trusted reputation for client advocacy and understanding of the criminal justice system, Garde Wilson Lawyers are a sensible choice for drink driving representation.

They have experience in a range of drink drivigfng cases, including those offending for the first time and those with relevant criminal history.

It is Garde Wilson’s belief that their specialisation in criminal defence offers reassuring expertise to their clients, proven by an excellent reputation against prosecution.

Garde Wilson promises their clients that they can prevent an extended or unnecessary loss of license, terms of imprisonment and long community correction orders.

So, don’t take a chance on your livelihood or quality of life - allow Garde Wilson Lawyers to represent you.

Customer reviews:
Gregy O’Shea left this Facebook review:
“From first initial phone call to end result, the dealings I had with Garde Wilson lawyers were unbelievably outstanding...Not only are they extremely brilliant lawyers the are great people too. Would give 100 stars out of 5 if I could.” 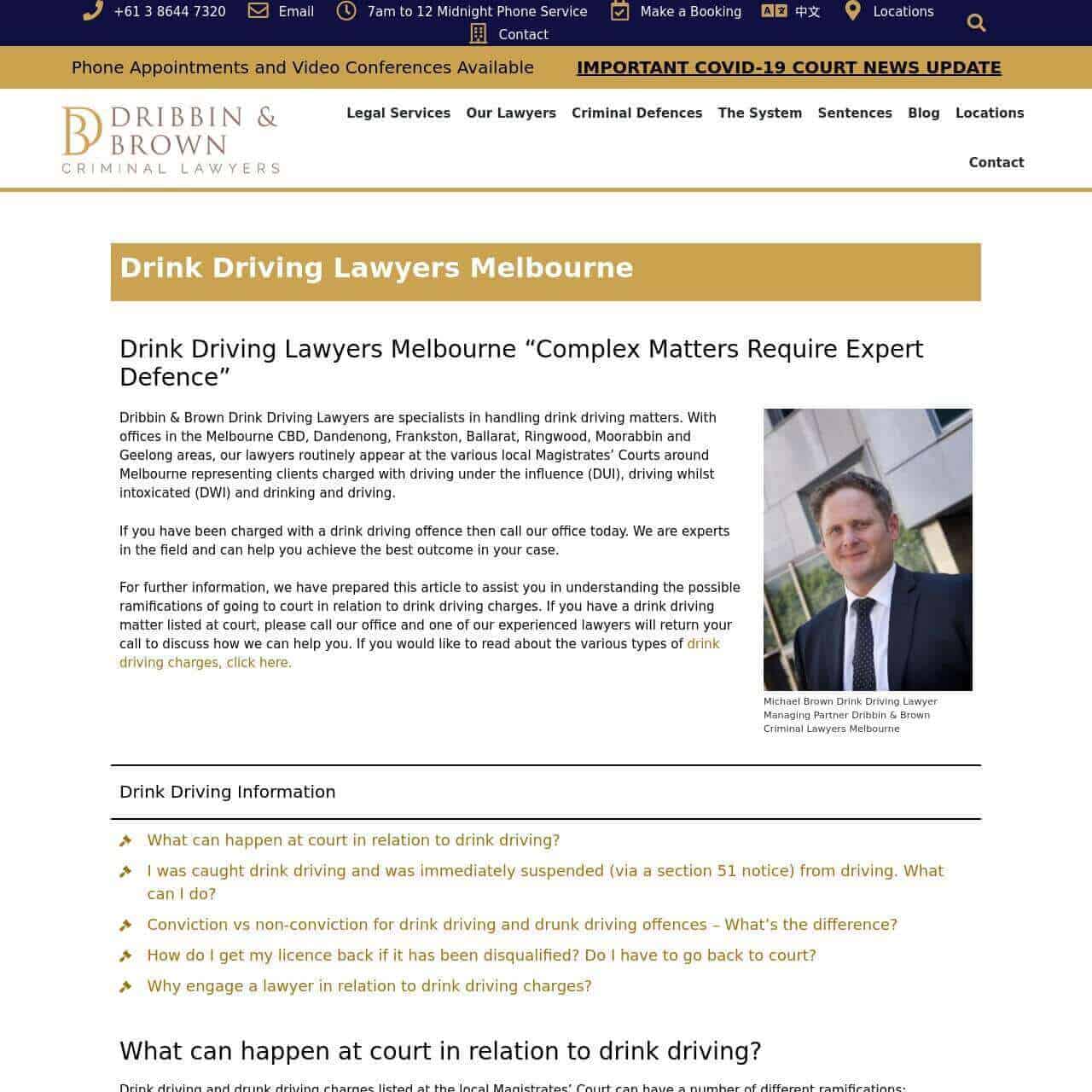 Dribbin and Brown care about the potential imprisonment, detriments to freedom and financial impact stemming from your drink driving charges, so you can feel comfortable that they will fight for you.

The firm seeks to provide the best advocacy, forensic judgement and customer service for you in your criminal defence, ensuring your experience aligns with their trusted reputation for excellence in Melbourne.

What’s most impressive is the professional dedication to drink driving representation demonstrated by the Dribbin and Brown lawyers, who have not only represented thousands of drink driving clients, but also regularly attend training and professional development courses to hone their skills in the area.

Highlights:
-Dedicated and experienced professionals
-Expertise in the area of drink driving defence.

Customer reviews:
Shahrzad Soltani left this google review:
“Dribbin & Brown has a group of amazing lawyers! Victor was the one who worked on our case. This was one of the most unique and complicated cases, and we were lucky to be in such capable hands. They worked on our case and achieved the best result possible!” 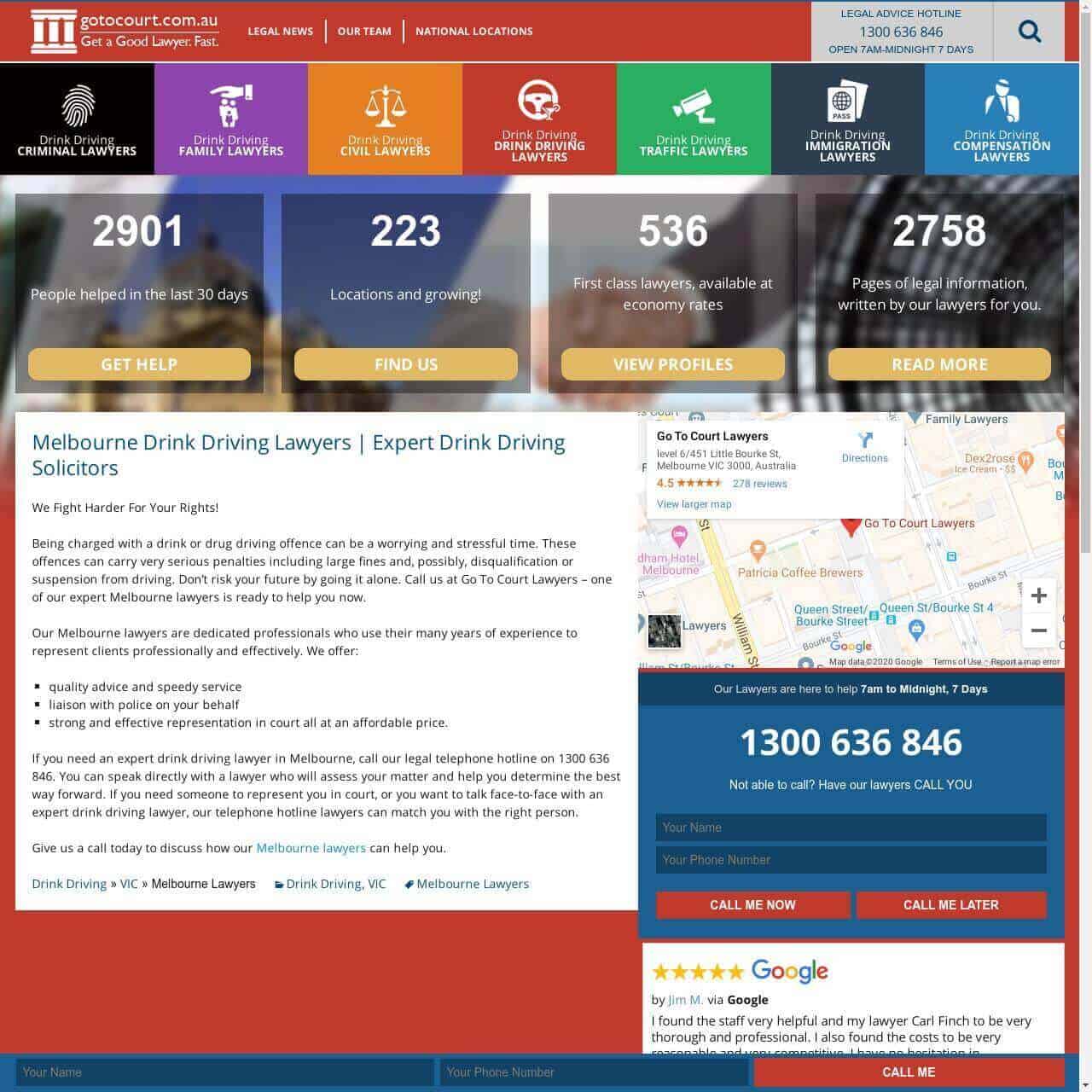 If you’re in need of affordable and easily accessible legal assistance for drink driving charges, Go To Court lawyers in Melbourne are available in areas across the city.

What’s more, Go To Court offers a hotline from 7am to midnight every day of the week, enabling you to gain immediate access to high quality legal advice from one of their qualified lawyers.

The hotline can also assist you with pairing a suitable lawyer for court representation or a face-to-face consultation.

As Go To Court lawyers care for your freedom and rights, you can feel reassured that their defence against criminal charges seeks to minimise sentencing and fight charges, without the expensive fees found at most Melbourne law firms.

Customer reviews:
Julie M left this google review:
“I recently had to use the services of Samira Ashkar from Go To Court Lawyers...What was a difficult time for both myself and my family her advice, commitment and assistance set our minds at ease. Cannot recommend her services more highly.” 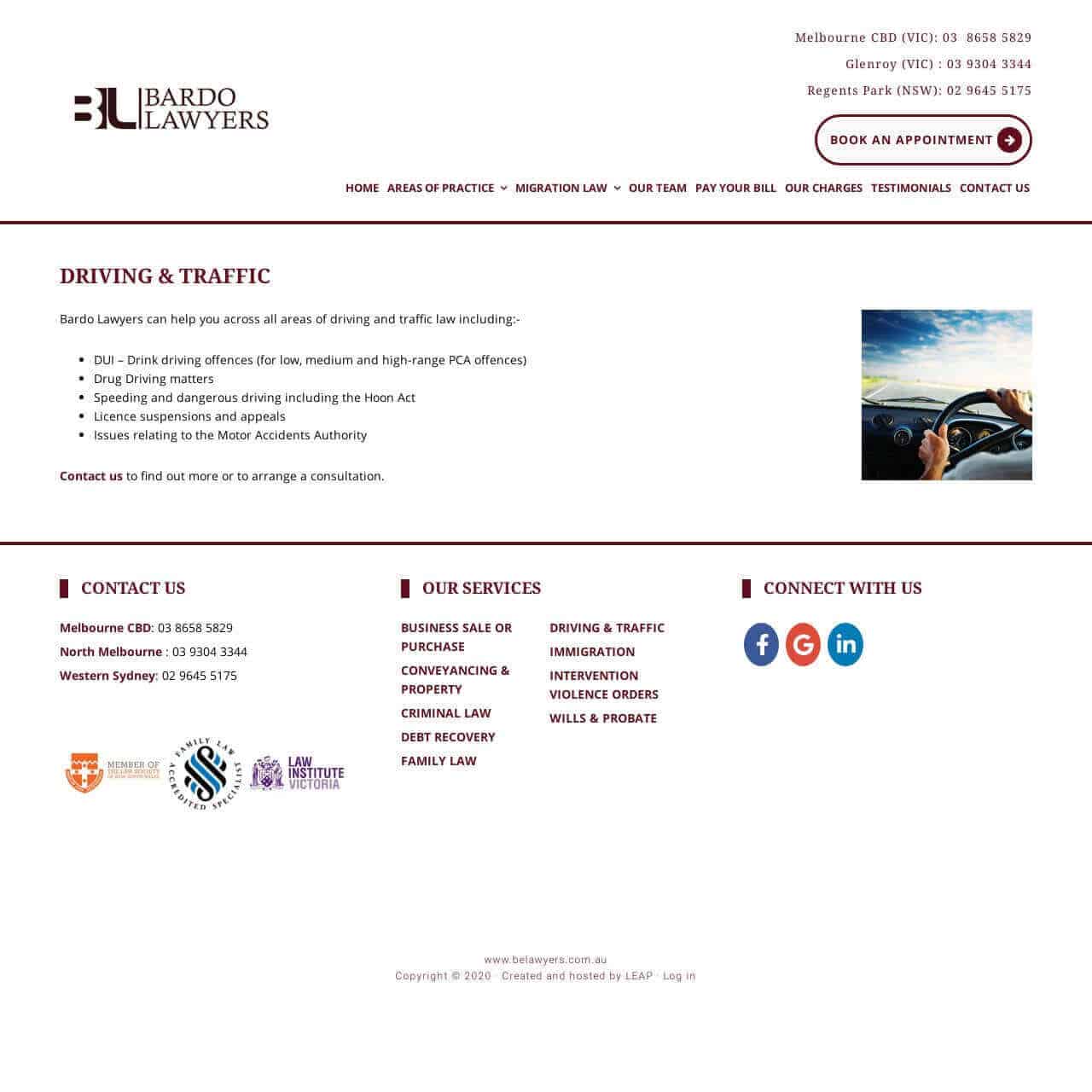 For efficient and reliable solutions in drink driving cases, Bardo Lawyers’ use of innovative and creative processes and systems can deliver you positive legal outcomes.

Extensive industry and professional experience allows the Bardo Lawyers to create a trusted relationship with their clients, based on delivering the best possible legal outcomes.

The way clients are prioritised at Bardo through commitment, communication and reliability is what facilitates the growth of their trusted community reputation.

Even better, their diverse group of lawyers speak a wide range of languages, ensuring that language barriers are rarely an issue at Bardo, so communication is easy.

Customer reviews:
Mariam Bardouh left this google review:
“I would like to thank Bardo Lawyers, specifically Rana Sayed for making this an easy process. She was very helpful and professional throughout the entire case. I would highly recommend her to everyone!”

How much do drink drive lawyers cost?

Unfortunately in the legal space, there's no one price fits all policy, so you'll likely need to reach out to a range of drink drive lawyers to get a free no obligation legal advice and quotation.

Some law firms will offer a fixed fee with no surprises, such as Wilkinson Lawyers, whereas others may offer rates based on the number of hours, or court appearances.

To give you can idea of hourly fees, most lawyers in Australia charge around $300 to $400 per hour, with the average being around $350 according to GoToCourt.

Smaller firms or those just starting out will likely be much less, but there are equally a large number of firms in Melbourne and Sydney that can be upwards of $500 per hour.

Most often you'll be required to pay a lump sum up front for your legal fees. The structure will often depend on your particular legal team, but is often paid into their trust account, rather than their business account.

This acts as a retainer and allows the lawyer to start work on your case, knowing they will get paid whether you're successful or not in your reason for using them.

If no retainer was kept, this would probably result in disgruntled clients refusing to pay after the work was delivered, which cannot be recovered.

After being charged with drink driving you'll often receive an instant loss of license for a period of time which varies between states.

You'll most likely receive a letter with a court date, to appear before a Magistrate to outline the charges that you are facing.

Most people hire a reputable drink driving lawyer before this appearance, as they can help explain the process further, and determine your plea, not guilty or guilty.

After this step, your lawyer will investigate further such as citing the police notes, test readings and ensuring everything was followed correctly during the incident.

If you plead guilty the process is often pretty straight forward and you may not need to appear in court again as your lawyer can act on your behalf.

If you plead not guilty, often a date will be set to hear your case before a Magistrate in a local court. Your license will often still be suspended during this time. You may be able to apply for a work exemption but this varies between states so speak to your lawyer before applying. 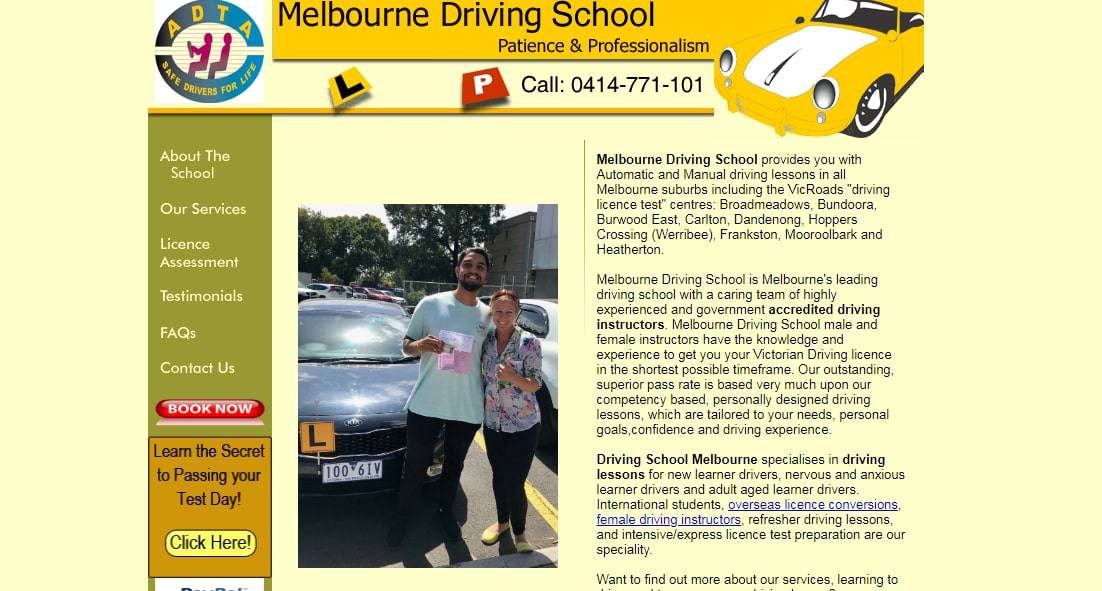